You Can Lead a Horticulture, But You Can’t Make Her Think

So as the job hunt draws close to three months, what with the economy and all, one begins to give up on life. I mean, you know you’re losing it when you begin to describe your writing goals as a quest for “general awesomeness” and start signing your cover letters
MORTAL KOMBAT!,
Kim Daly

Clearly a shift in strategy was needed and, as I am what I am, I started with new interview attire. Why? Well, let’s take a look at what I was working with:

In the grand tradition of getting by with a little help from my friends, I took heart when, in discussing professionally appropriate skirt length post-interview one afternoon, Ariel replied with an emphatic “THAT’S the skirt you wore?” when I indicated the garment pictured above. My eyes were further opened later that night, when I explained to another friend that when going on interviews, I did in fact wear stemmed stockings with my 4-inch patent leather Mary-Jane pumps:

Upon showing these items to said friend, I was rather creepily informed that “that’s hot.” Perhaps not exactly what I was going for.

This scenario really alerted me to the dangers of narrative fashion. It seems in planning my professional attire, I confused Tess McGill, Melanie Griffith’s character in Working Girl,

Oh, you though I was gonna say Loretta, Melanie Griffith’s character in Fear City, didn’t you?

Because of your intimate familiarity with Melanie Griffith’s oeuvre? Seriously though, Billy Dee Williams IS the man. Can you believe the cool on that guy?

As usual, I digress. But I think I got back on track with the new professional wear:

Not too bad. The skirt’s a bit longer, the heels a bit lower. Oh, and the top isn’t transparent white silk. That too.

Anyway, on account of this whole ordeal, it’s been brought to my attention just how much my wardrobe is inspired by strippers and prostitutes. So much that I find myself encouraging those I love to enrich their own outfits with sex-worker-inspired narratives. Case in point:

Ariel’s 1970’s Las Vegas stripper/single mother on her day off, late for picking her son up from school, which further developed into

1970’s Las Vegas stripper/single mom at her first PTA meeting, eager to prove herself to the other moms, who are mostly snotty, skeptical housewives and haughty, cynical women with more “respectable” careers. Wait, let’s get one more: 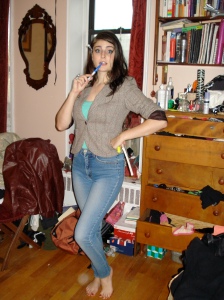 She’s comfortable with her body and sexuality, but unsure of her worth as a mother and role model! Man, these action shots are priceless. That, my friends, is a classically trained actress right there. Thanks Ari.

I also went digging through my archives a bit and found this little number:

Clearly inspired, in a muted and not nearly as awesome way, by Jodie Foster’s breakthrough role (unless you count the original Freaky Friday. But why would you do that?) as 12-year old prostitute Iris in Taxi Driver: 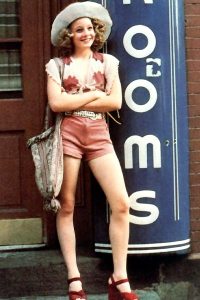 Actually, I imagine that getting a job will be a lot like that most clichéd of sex worker films, Pretty Woman. For example, if/when a potential employer makes an offer, I’m almost positive it will be like the famous necklace scene:

Except instead of a necklace, Richard Gere (potential employer…or Richard Gere, at this point I’m not really picky) will offer me a plentiful salary. And instead of laughing maniacally, I’ll weep with tears of gratitude and shout “Dear God, it’s finally over!!” to the sweet, sweet heavens.

I’m also pretty sure the general experience of being employed will be a lot like the last scene of the movie:

That’s right Richard Gere/Potential Employer, I’m gonna save you right back with my attention to detail and “general awesomeness.”

Maybe I’m looking for the wrong kind of job…

3 responses to “You Can Lead a Horticulture, But You Can’t Make Her Think”