Here’s to You, Lauralou

In the midst of prolonged camera troubles, I must break the silence to honor the birth of one of the loveliest ladies around, the very event with which We Look Awesome got its start,

Sweet Lauralou’s birthday. Roommate, photographer, best friend, awkward co-dependent, fashion inspiration. At this point, Lauralou has pretty much transcended it all, firmly planting herself in my life, and the lives of most who know her, under the general category of “person I would die for, except I won’t because my death would probably make her sad and her happiness means more to me than anything else in the world.” You know, that category.

Above all else, the thing I find most inspiring about Lauralou’s ingenious style is her utter commitment to narrative. This manifests itself most prominently in one concept:

Never before have I seen a (technically) grown woman so joyously ecstatic over a large horse that, aside from cookies and bizarre synth music, her favorite markers of the holiday season are the Budweiser Christmas Clydesdales

which, though superfluous, I was forced to include on account of its excessive awesomeness. Seriously, that’s a fucking clydesdale high-fiving a dalmatian. Talk about inspirational.

Oh goddess of digression, lead me not astray! I learned that Lauralou’s obsession with clydesdales had bled into every aspect of her life pretty early in our relationship, when she explained to me that highlights of her 2009 Christmas break included the discovery of shoes that made her feet look like “a sparkly clydesdale” 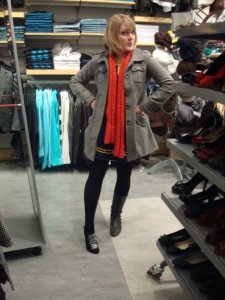 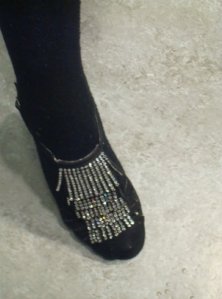 In fact, when she sent me these pictures she described them as “pictures of me trying to be a sparkly clydesdale” (my emphasis), indicating that she didn’t merely think they made her feet look like a clydesdale’s, but that by wearing them, she may actually be transformed into a clydesdale with sparkly feet. Amazing.

But the point of this clydesdale quest that I found most admirable occurred about a year and a half later, when, during a skype date I’m pretty sure was exclusively dedicated to talking about and showing off new shoes, she told me that she had finally found the penultimate in cyldesdale-inspired shoes. She described them thus (tight paraphrase), “they’re not really flattering, but they make my feet look like a clydesdale’s, so I’ll probably get them.” That, dear friends, is commitment to narrative fashion.

She eventually did acquire said shoes: 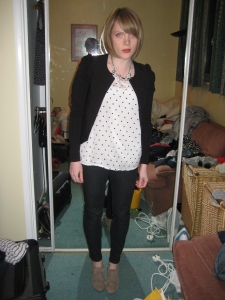 and they lived happily ever after in horsey-foot heaven.

So follow your dreams y’all, and one day you too can be transformed, through style, into a majestic clydesdale, or whatever it is you want to be.