I’m Turning Into a Hobo-Chic Superstar

If you do a quick review of We Look Awesome, it becomes pretty apparent that at heart I’m really just an overweight middle-aged gay man who lives with his mother (or at least calls her everyday). Seriously, I’m a bit more obsessed with Patrick Swayze and The Golden Girls than the average 25 year-old female, no? Speaking of, let’s take a look back at a photo from last week’s post: 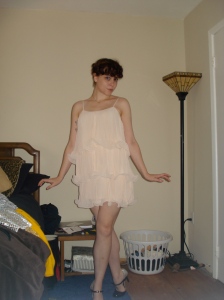 and reflect on how much I look like Rue McClanahan in it: 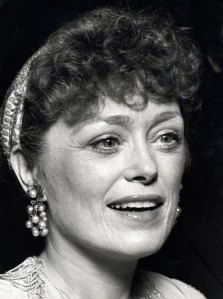 Point made? Yeah, I thought so.

Anyway, despite the fact that my outward awesomeness belies the sad truth inside, I do occasionally get opportunities to do really cool things (however limited due to living in the suburbs…but that’s only temporary…RIGHT????).

So though some might think it’s a tad pathetic that I only got to see two bands at CMJ, I’m gonna file it under “better than nothing” in the interest of acting my age, gender, and sexual orientation.

I’ll start with a note on the second band, Fan Tan. I can’t really think of a better description of these guys than the one found in the CMJ edition of The Deli Magazine, which explains the “wish we were in a massive rainstorm and there was a camera shooting down on us from a crane, because then we could outstretch our hands and lift them high to [the] heavens while shouting a roar that’s equal parts joy and pain” that their music evokes. Seeing these guys definitly made me feel like Tim Robbins in Shawshank Redemption: 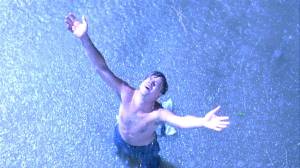 but replace the prison with Williamsburg, the rapists with that bartender who wouldn’t give us free steak and eggs (I TRUSTED YOU!), and Morgan Freeman with a group of enjoyably intense and talented musicians. Yeah, that probably works.

And now for my faves: 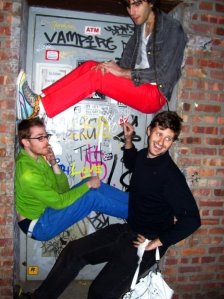 I’m Turning Into!! Aren’t they colorful and the best? Don’t they defy gravity?

To describe these guys, I’ll steal another quote, this time from fellow CMJ performer and Tayisha Busay glitter girl Ariel Sims, who aptly said, “I swear to God, I have not met a more irresponsible bunch of guys than I’m Turning Into”. As such, about four months ago I asked these guys to send me some pictures and quotes best capturing their awesomeness and they never did, forcing me to put them on the spot right after their show. 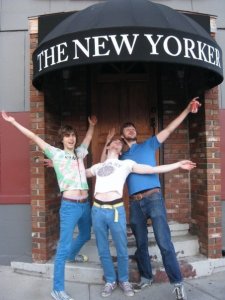 Edd Chittenden (left) called his style “cut offs and hobo wear with bright colors”. Steve Tarkington (right) said he chooses his clothes “based on what I wore the day before” and told me the inspiration for that day’s outfit was that he’d “been wearing these clothes for a while”. And Jhon Grewell (center) said “I wear clothes that look like my girlfriend’s clothes, but they’re not, because I don’t have a girlfriend”, to which he added “(wink)”.

Basically, the raging irresponsibility and general homeless rainbow aesthetic of I’m Turning Into all mesh serendipidously to one overwhelming effect: these guys are a ton of fun, and it reflects in their music and performance. Check it out (my apologies for the poor video quality…I was using an emptied falafal bag as a tripod):